The suicide rate for white children and teens between 10 and 17 was up 70% between 2006 and 2016, the latest data analysis available from the Centers for Disease Control and Prevention. Although black children and teens kill themselves less often than white youth do, the rate of increase was higher — 77%

Looking at younger teenagers, suicide is the third leading cause of death of individuals aged from 10 to 14. Males and females are known to have different suicidal tendencies.

For example, males take their lives almost four times the rate females do. Males also commit approximately 77.9% of all suicides, however, the female population are more likely to have thoughts of suicide than males. 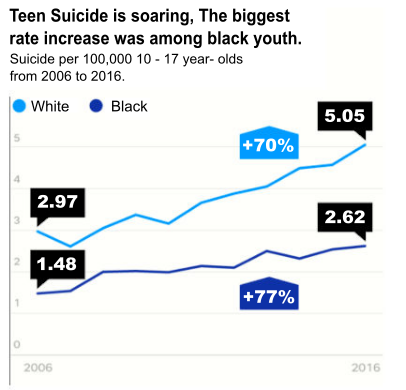 Suicide differs through race and ethnic backgrounds. The Center for Disease Control and Prevention ranked suicide as the 8th leading cause for American Indians/Alaska Natives. Hispanic students in grades 9–12 have the following percentages: attempting suicide (18.9%), having made a plan about how they would attempt suicide (15.7%), having attempted suicide (11.3%), and having made a suicide attempt that resulted in an injury, poisoning, or overdose that required medical attention (4.1%). These percentages are consistently higher than white and black students.

LGB teens and young adults have one of the highest rates of suicide attempts.

Depression and drug use among LGB people have both been shown to increase significantly after new laws that discriminate against gay people are passed.

Bullying of LGB youth has been shown to be a contributing factor in many suicides, even if not all of the attacks have been specifically addressing sexuality or gender.

More than one out of every five (20.8%) students report being bullied

23.6% of 12th grade students have reported using illicit drugs in the last year.

7.5% of teens reported that they had smoked marijuana for the first time before the age of 13.

63.2% of high school students reported that they have drunk alcohol at least once in their life.

17.2% of high school students have reported drinking alcohol for the first time before they were 13 years old.

Alcohol has been linked to the deaths of 4,358 young people each year, due to motor vehicle crashes, homicides, alcohol poisoning, falls, burns, drowning, and suicide.

Anxiety disorders are highly treatable, yet only 36.9% of those suffering receive treatment.

Generalized Anxiety Disorder (GAD)
GAD affects 6.8 million adults, or 3.1% of the U.S. population, yet only 43.2% are receiving treatment.
Women are twice as likely to be affected as men. GAD often co-occurs with major depression.

SAD is equally common among men and women andtypically begins around age 13. clinical depression and anxiety among adolescents ages 12 to 17 have gone up.

About 20 percent of all teens experience depression before they reach adulthood.

You know that depression is a growing issue. But do you know the extent of the problem?

That is why we created a free Depression Quiz and provided a lot of resources to help recognize and deal with depression.

We based the quiz on the DSM-5 criteria. The quiz is quick and confidential.